THE ESSENCE OF WORK

Nikkei National Geographic Inc., in collaboration with Jadite Galleries, and Photographers Associates Tokyo, is pleased to present a solo exhibition celebrating the work of Japanese documentary photographer Masashi Mitsui, Grand Prize Winner of the Nikkei National Geographic Photo Award. The show presents Mitsui’s powerful images of workers inside Asia that reflect a way of life that is rapidly disappearing. This marks the photographer’s first exhibition in the United States.

Traveling by motorbike to immerse himself in the local communities, Masashi Mitsui (born 1974, Kyoto City) has rode well over 70,000 miles visiting 39 countries, primarily in Asia. He rides from town to town without a fixed destination or a map to guide him. With minimum preparation, Mitsui allows himself to be guided by chance encounters with everyday people in remote locations that have not been documented by other professional photographers.

Mitsui is drawn to ordinary working people—farmers, fishermen, blacksmiths and brick factory workers. Their work does not require the special skills of traditional craftsmen; instead, it is mostly simple and physical, and often taken for granted. Mitsui finds the people he meets during his travels, beautiful and inspiring. Working by the sweat of their brows, they embody for him a fundamental human vitality and spirit that is reflected in the assigned roles they play in their communities  that have been passed down for generations. The essential meaning of “work” is to embrace one’s allotted role in life, and carry it out with pride and good will.

The Main Room of Jadite Galleries will feature thirty-one photographs by Mitsui focusing on the diverse regions of India, along with several images taken in Myanmar and Bangladesh. The Back East Room will feature nineteen images concentrating on Mitsui’s work in Rohingya Village in Myanmar.

Photographs from the Exhibition: 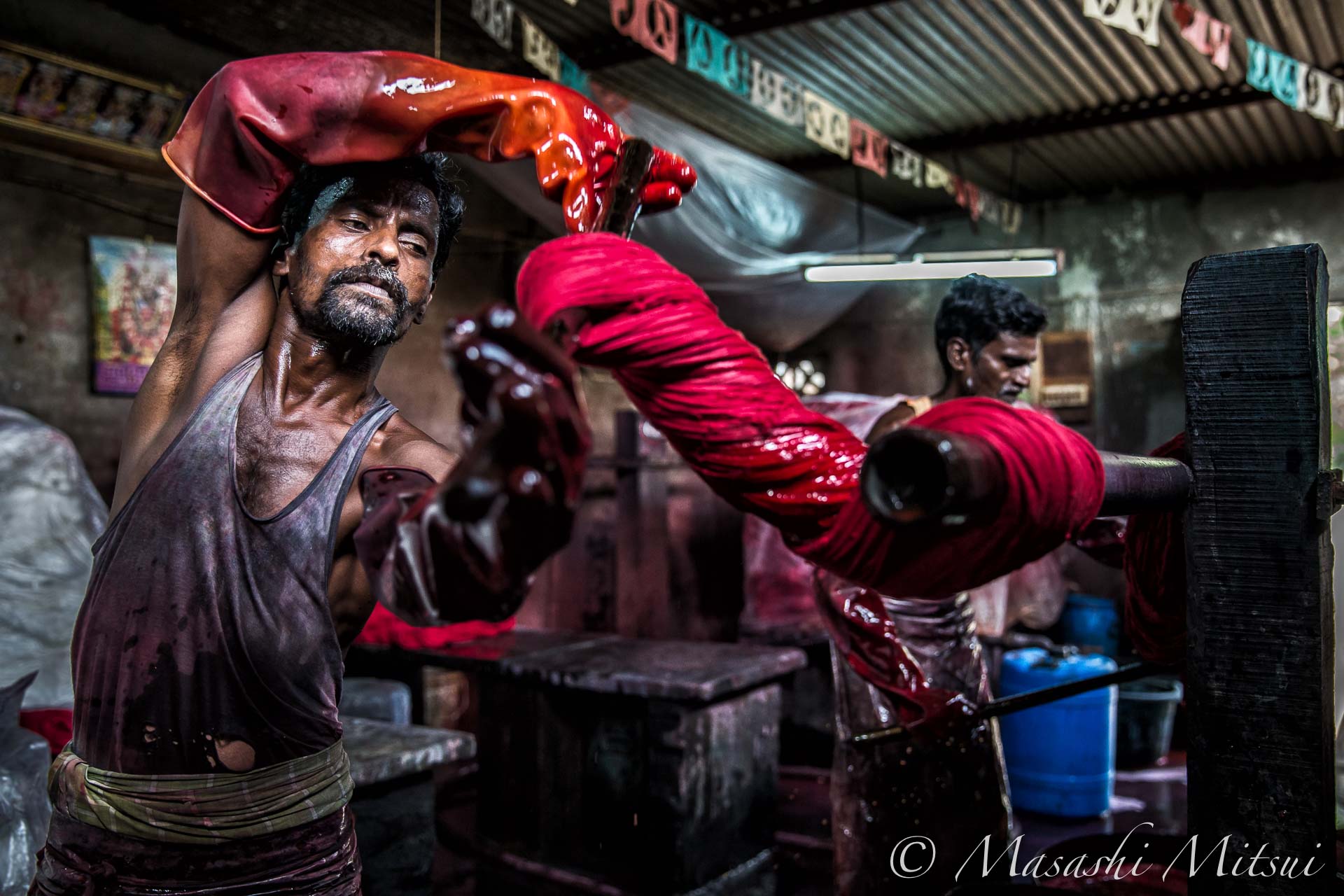 SQUEEZE RED: A worker at a dye factory is compressing a bundle of strings that has been dyed red. In the concentrated movement of the man dedicated to his work, I was aware of an inner glow that seemed to emanate from him. They say that these threads will be used to weave brightly colored fabrics, and that the fabrics will be sold not only domestically, but also shipped overseas to countries in the Middle East and Africa. These factories, whose manufacturing process is entirely dependent on manual labor, do not seem untouched by the waves of globalization. (Tamil Nadu, India 2015) 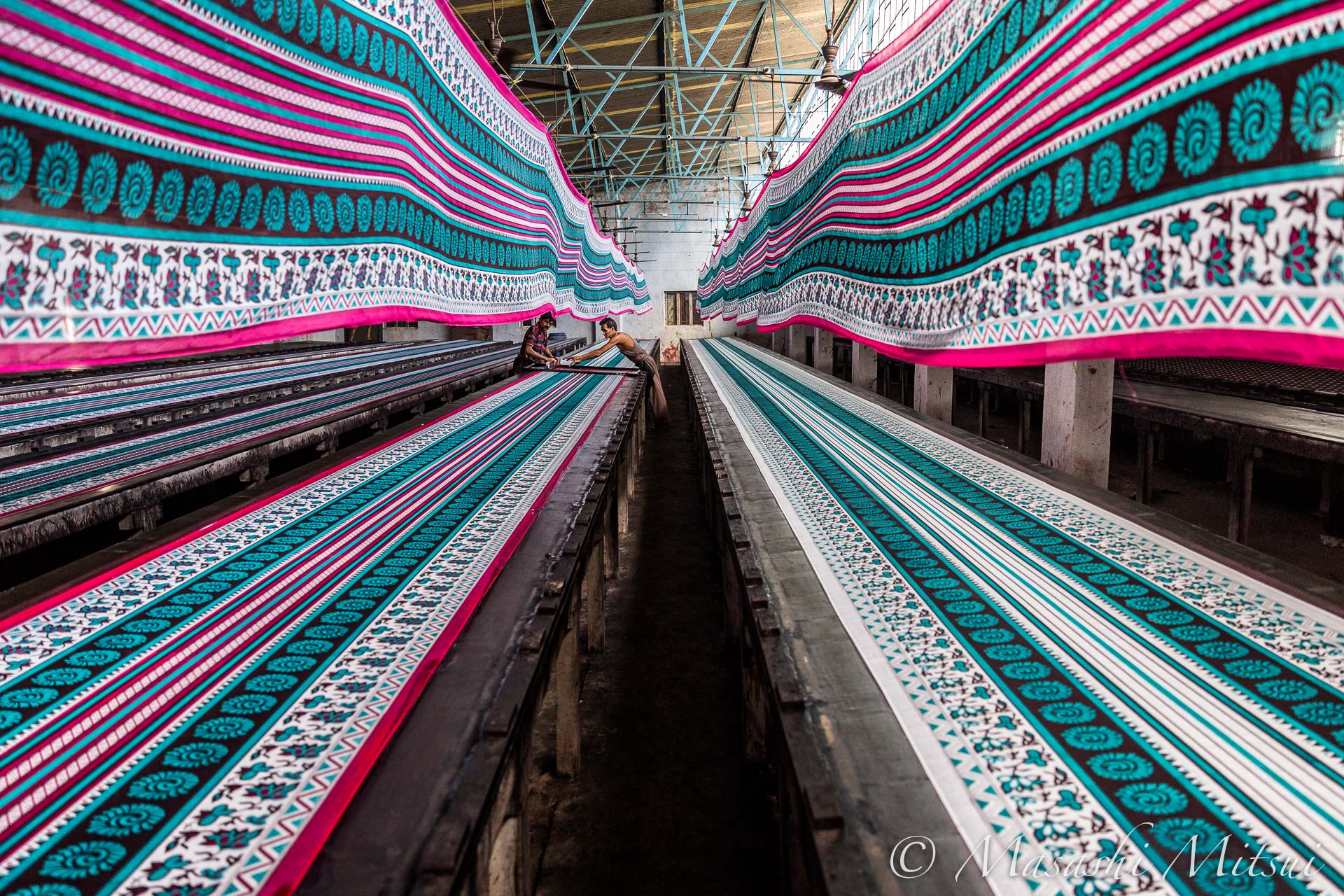 COLORFUL PATTERN: These craftsmen are hand printing a pattern on fabric for saris, a traditional Indian garment. A stencil screen is placed over the fabric, which is fixed to a board; then they force the ink through the screen with the pressure of their arms to transfer the design. The work requires precision and physical strength. In recent years, an increasing number of factories are adopting machine printing. However, it is said that hand printing remains more efficient for making products in small batches, as well as for printing on thin fabrics. (Gujarat, India 2016) 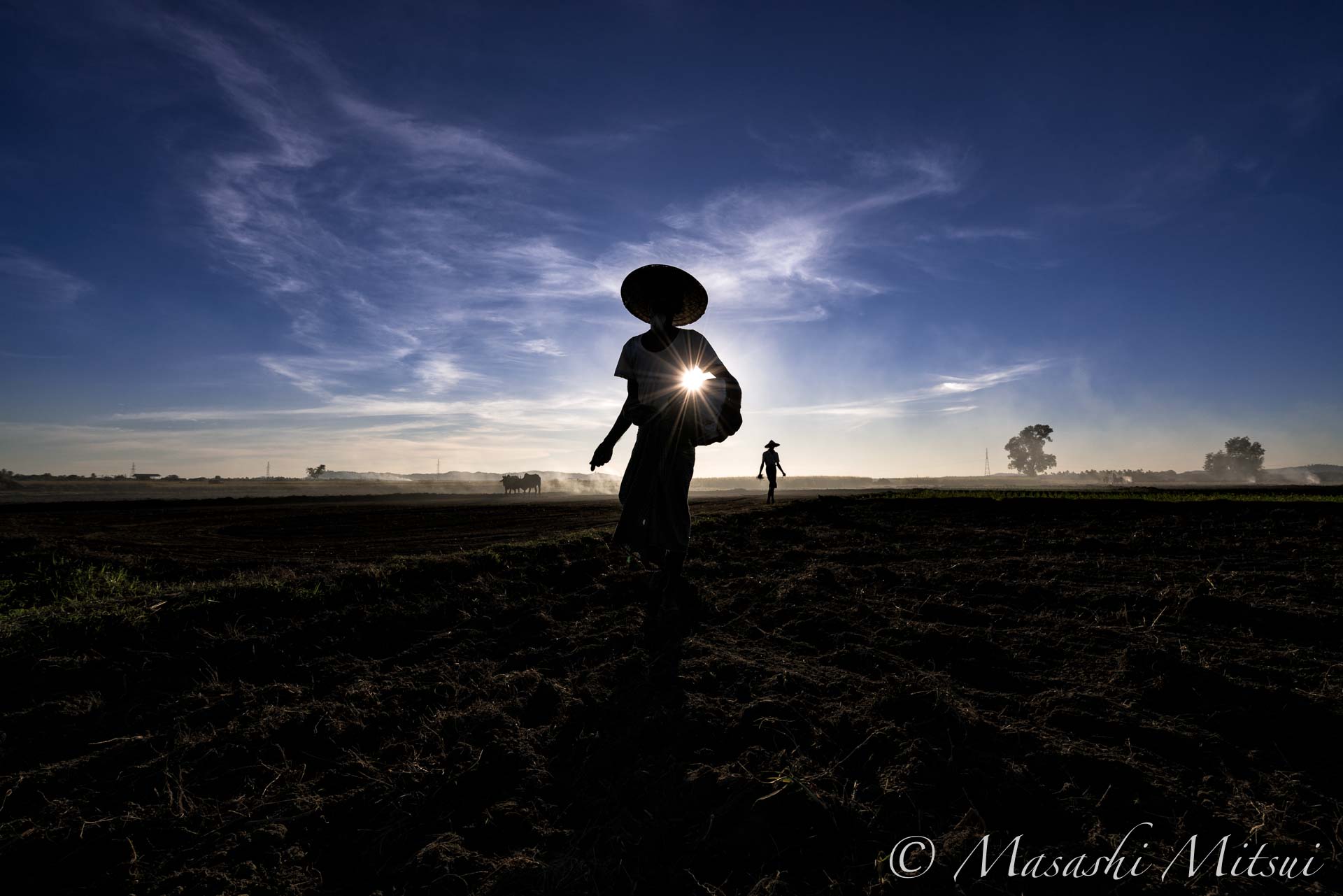 LAND OF ROHINGYA: I saw people working with dignity and pride even in harsh conditions, as they calmly tilled the fields and sowed seeds. Though facing an unreasonable situation and poverty, they did whatever was demanded of them. “Both my father and grandfather have tilled this soil,” a Rohingya villager told me. “Someday, my children and grandchildren will too. This is our home, and we are not leaving, no matter what anyone tells us.” (Rakhine, Myanmar 2017) 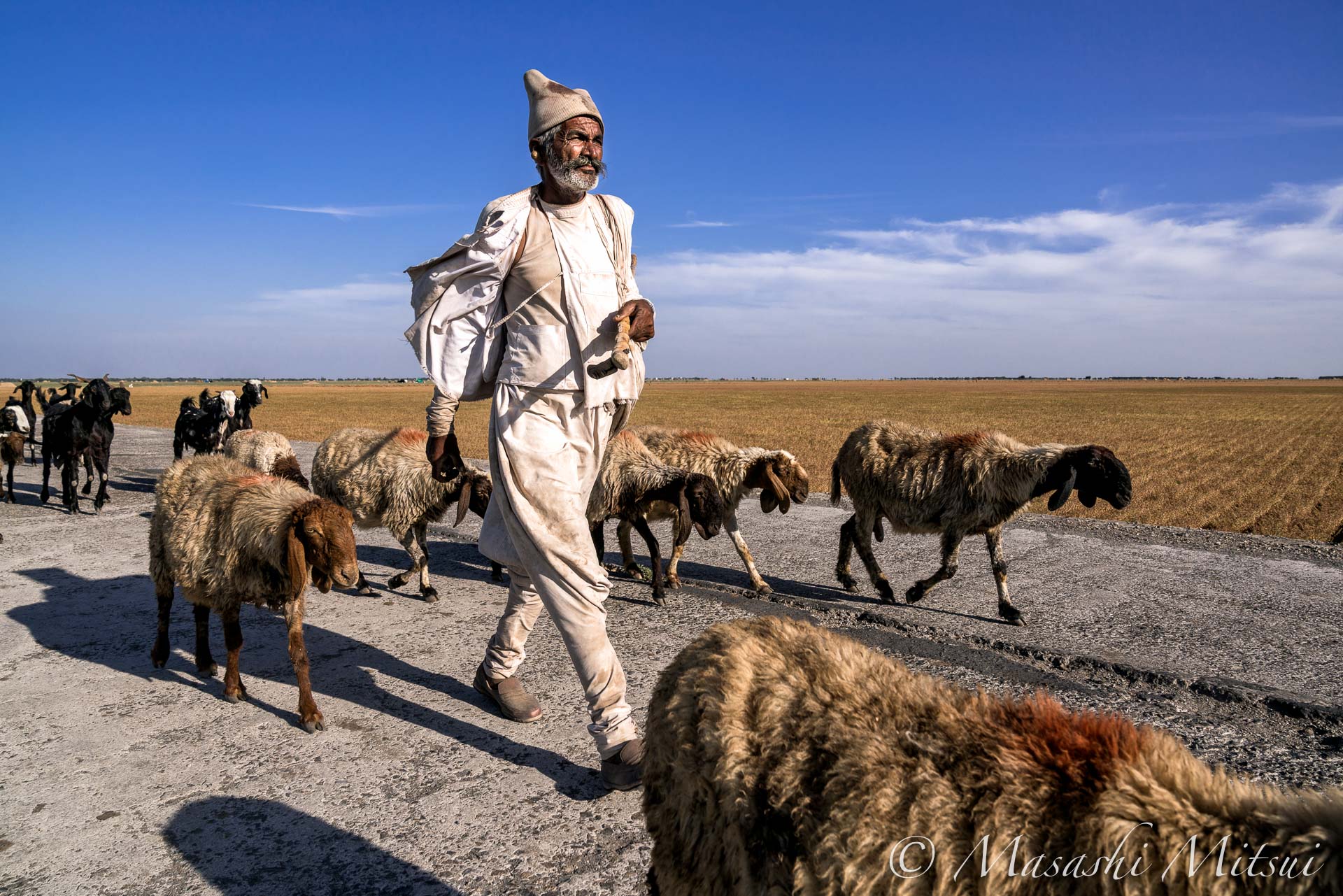 JOURNEY OF THE SHEPHERD: A shepherd called Diru, who Mitsui met on the plains of Gujarat state in western India, was dressed in white indigenous garb, wearing a white knit cap, and leading a flock of about 200 sheep. The shepherds were living in their own time, which flowed in as leisurely as the clouds across the sky, harnessing the powers of nature. Without relying on modern devices, they grasped naturally all the information needed to find grassland and water. (Gujarat, India 2018). 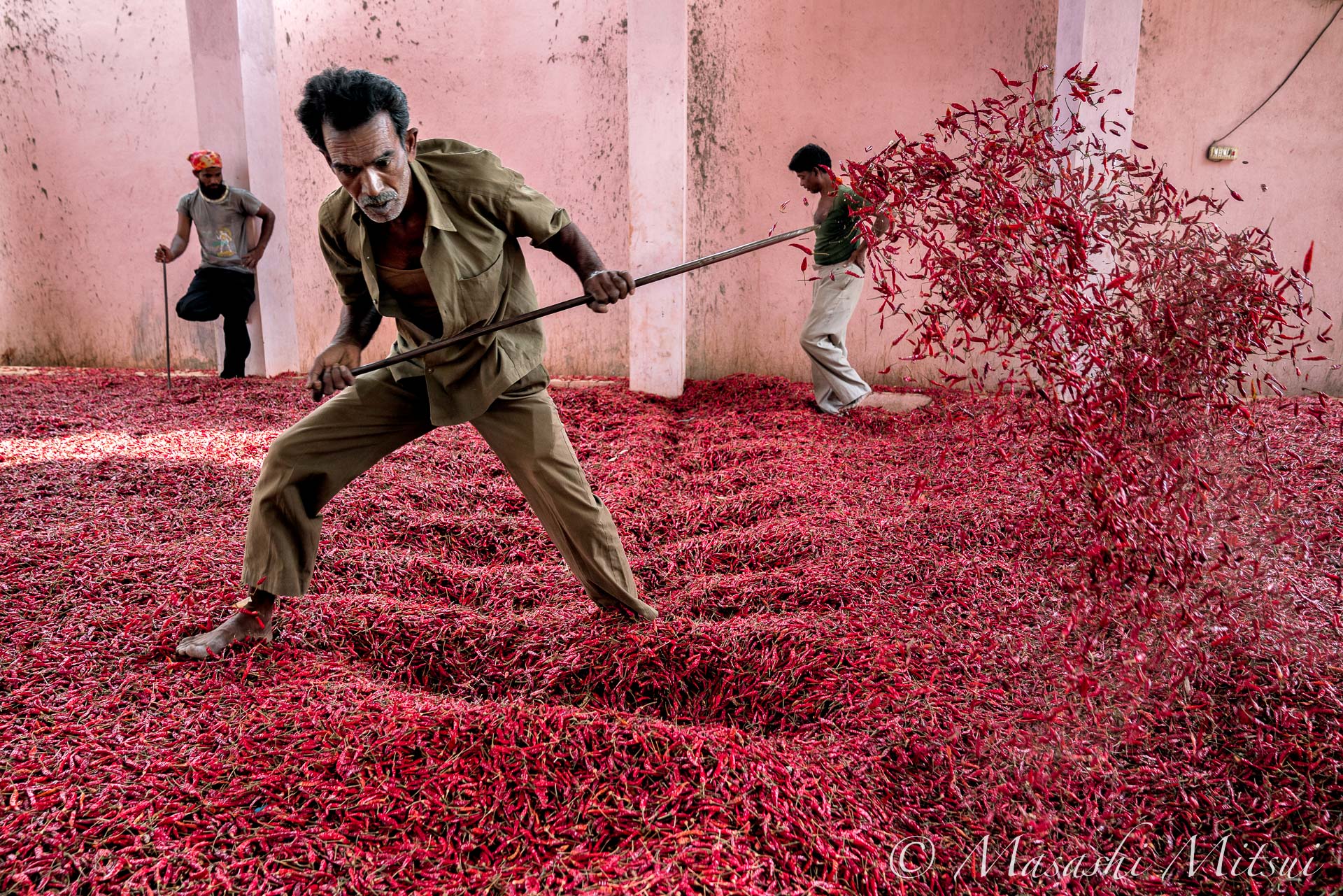 RED CHILI PEPPERS: Chili pepper markets are the most exciting markets in India. When the workers toss up the peppers to dry them, the pungent ingredient “capsaicin” (a chemical component) is released in large quantities, triggering uncontrollable tears and dripping noses. Although the workers here must have been ‘pros’ in dealing with capsaicin, they were continually sneezing and coughing with tears running down their cheeks. (Andhra Pradesh, India 2018) 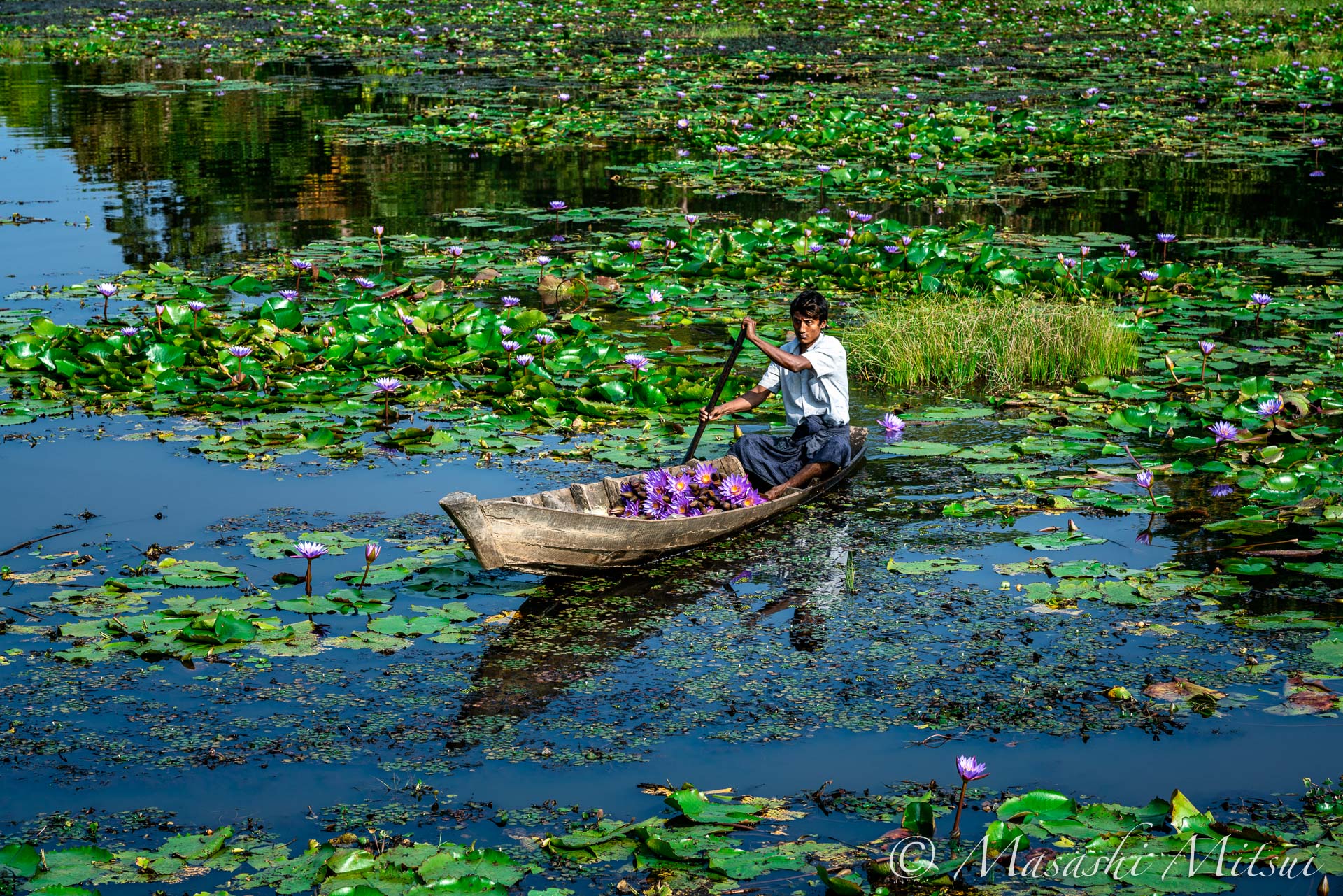 PICKING LOTUS FLOWERS FOR BUDDHA: A young man on a wooden boat was picking lotus flowers in a marsh. Lotus, known to bloom all the more beautifully in a muddy pond, has a special meaning to Buddhists, who make up 80% of Myanmar’s population. They are often sold in front of temples as an indispensable offering in Buddhist rituals. (Rakhine, Myanmar 2016) 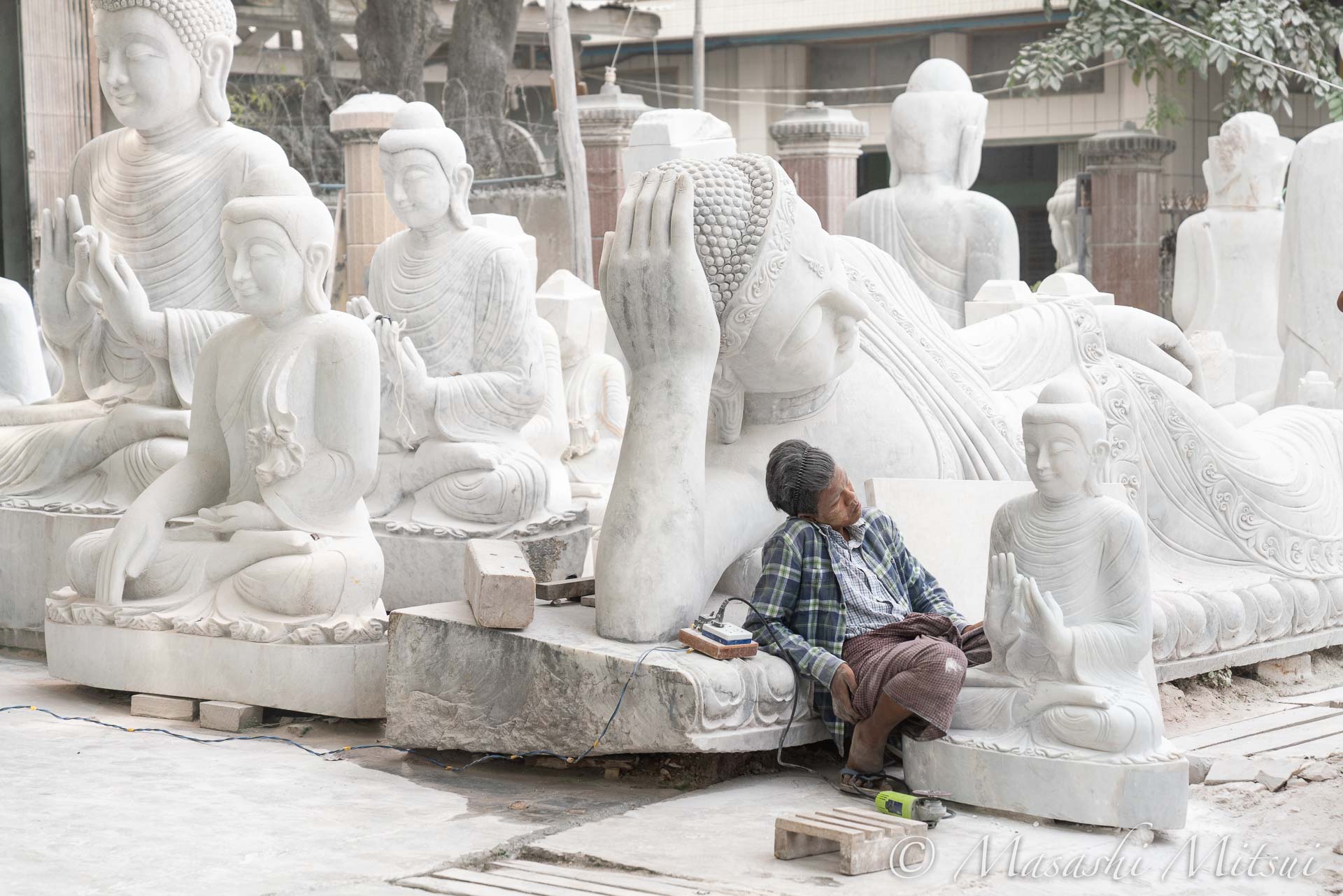 BUDDHA STATUES OF MARBLE: In Myanmar, where 80% of the people are Buddhists, making Buddha statues is very popular. Particularly in the city of Mandalay, located in the central part of the country, many workshops specializing in sculpting marble statues border the streets. Artisans carve out a rough shape with an electric cutting tool, and then work on details with chisels and files. At the work site, where the artisans were surrounded by marble dust permeating in the air, they were so covered white, they looked like stone statues themselves. (Mandalay, Myanmar 2018) 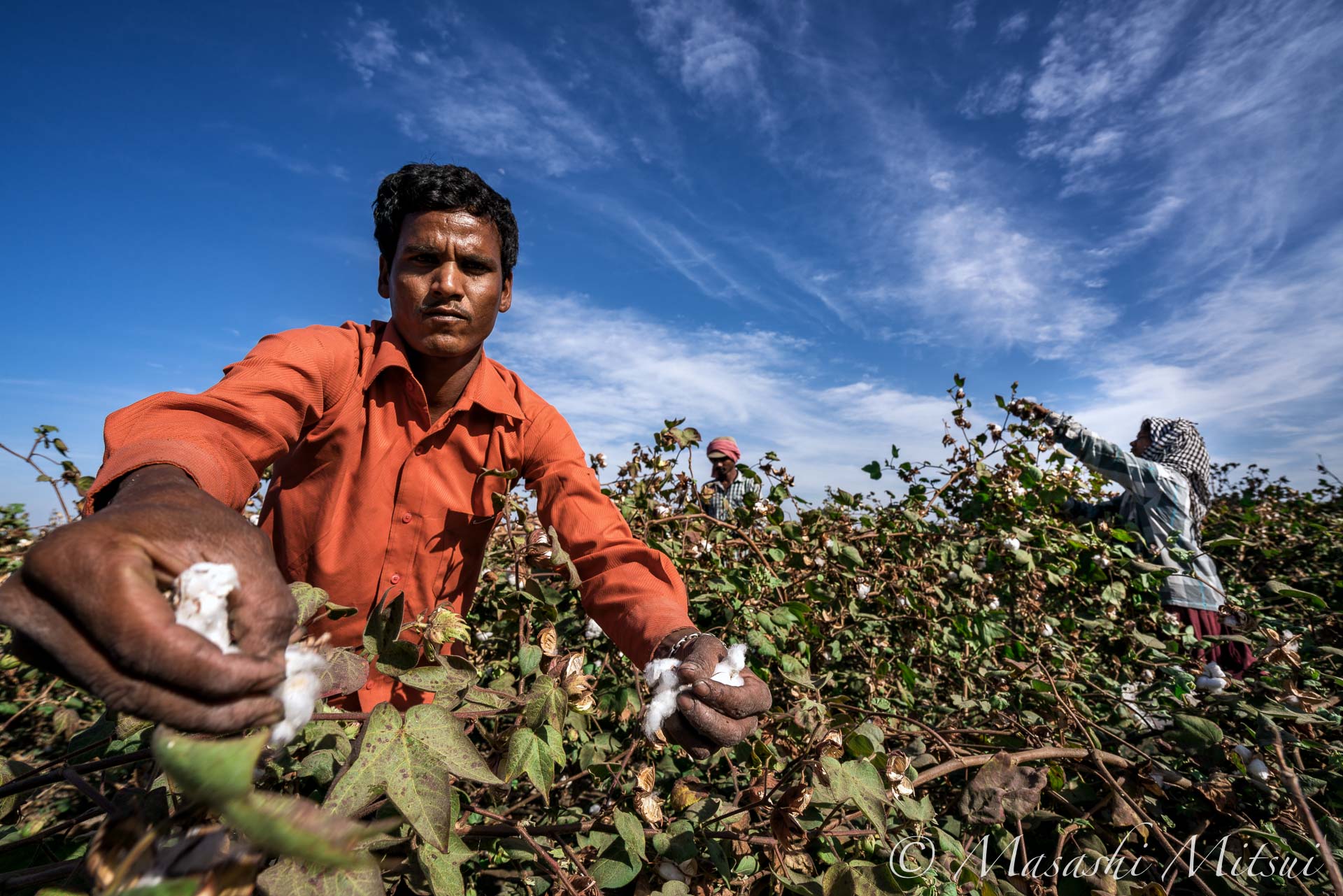 COTTON COUNTRY: These people were picking cotton in Gujarat state in western India. The country is the largest cotton producer in the world, and it is grown nationwide, particularly in arid regions. The harvest is still done by hand as labor costs remain low. In other words, cotton production accounts for and sustains many jobs in this country. Raw cotton will be turned into threads at a spinning mill, and then woven into fabrics for making traditional clothing such as sari and lungi. (Gujarat, India 2017)

Mitsui writes: “One by one, the workers whose occupations have been handed down through generations are losing their roles in society. It is an accelerating trend that no one can alter. There is no guarantee that a currently existing job will be around in ten years … I want to foster awareness of these workers, to document in my photographs their labor and sweat, the earnest look in their eyes, as well as the grace of their bodies. I hope to make the public more appreciative of work which is often overlooked because of its humdrum character, yet makes an essential contribution to the world …. Bringing it to the fore is what I consider my role to be as a photographer.”

About the Photographer: Masashi Mitsui was born in Kyoto City, Kyoto in 1974, and currently lives in Tokyo. After graduating from the Faculty of Engineering, Kobe University in 1998, he worked for two years at a precision machinery manufacturer, Dainippon Screen Co. Ltd. (now SCREEN Holdings Co., Ltd.) as an engineer. In December 2000 – October 2001 Mitsui decided to follow his passion and pursue a career as a photographer. He traveled to 39 countries, mainly in Asia, by motorcycle, documenting the lives of ordinary people who captured his admiration and imagination. He also writes and gives lectures based on his experiences during his travels capturing a way of life that is disappearing. Mitsui won the grand prize for the 2018 Nikkei National Geographic Photo Award. He has published over five photo books.  His work has been shown at Canon Gallery in Ginza, Osaka, Nagoya, Sendai and Fukuoka and at Sony Imaging Gallery, Ginza, Tokyo. For more information, go here: https://masashimitsui.com.

About Photographers Associates Tokyo: New Japanese photography is a unique form of expression and sentiment. Japan’s state-of-the-art digital cameras have contributed to the explosion of photography in post-war Japan and the birth of a new visual language reflecting the diversity of Japanese culture and the natural world. Japanese photo books are supported by an exquisite sense of design, printing and production that showcase the uniqueness of Japanese photographs. We aim to capitalize on Japan’s high-quality photography market by accelerating its growth and visibility internationally through partnerships who support the power of photography. For more information, go here: https://patokyo.com.

About Jadite Galleries: Jadite Galleries, established in 1985, contributes to the ever-changing contemporary art scene in New York. Exhibitions cover the spectrum of art form created by a myriad of talented artists from the United States, Europe, Latin America, and Asia. With three exhibition spaces, Jadite Galleries has fostered a number of promising artists and attracted many serious collectors over the years. For more information, go here: https://jadite.com/.

Please contact Andrea Smith to receive press images and to arrange an interview with Masashi Mitsui. 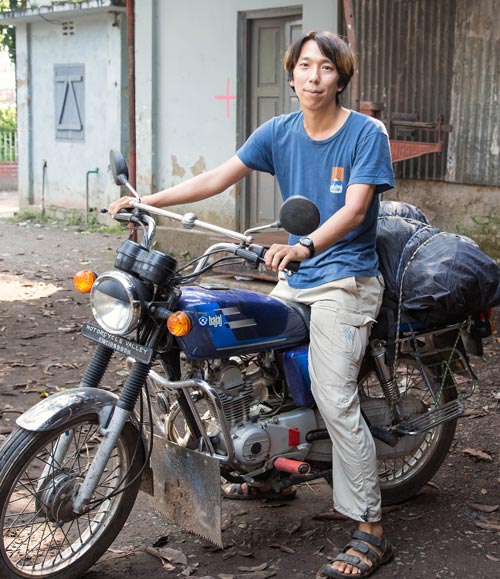